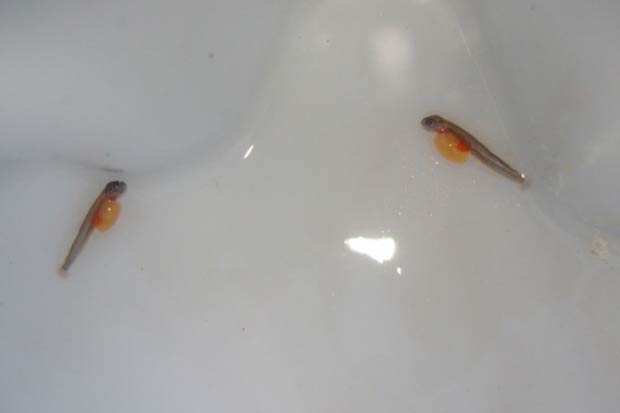 Did you know that rainbow trout were introduced into the UK from north America and the sea-going version in the USA are called ‘steel head’.The Americans were very proud of that fact when we went benchmarking in north Carolina last November.They told me everything good in Europe originated in America.!!!

Anyway to continue our life cycle.The eyed eggs shown in my previous blog have hatched.The time of hatching depends on the water temperature. an enzyme is secreted which softens the eggs shell and allows the alevin to break through.The alevin has retained its yoke sac and we sometimes refere to this as the SWIM-UP stage. We don’t feed as the alevin get its nutrients from the sac.I had a family who came for a visit yesterday and they were absolutely in awe.

I took this photograph this morning and it shows 2 alevin. it is quite hard to get a detailed photo and they are approximately 16mm.Another few weeks and they will loose their sac and require food. Very expensive food may I add. i just got word this morning that the food price will increase by €50/tonne which is very bad news indeed. Its a combination of fish meal/fish oil prices but you know what I have heard all the excuses before.Chin up.!!