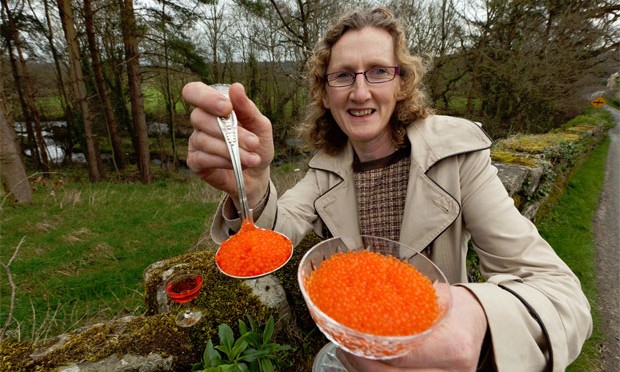 Today is a great day for us here at Goatsbridge Trout Farm as we’ve announced the arrival of Ireland’s first caviar… made from trout.

A long time in the making, it’s already won plaudits from the Russians, producers of the world’s best. Twitter has been alight this morning with talk of our Irish Trout Caviar, as well as the radio and papers. While it’s a busy day for us here, take a read below of our news currently doing the rounds. We’ll be back soon to let you know how it’s all going!

Here’s the Irish Times article today, the photo above is by Dylan Vaughan and here’s the official release…

A Kilkenny couple has launched Ireland’s first caviar – and it has already won plaudits from the Russians, producers of the world’s best.

The trout caviar has been developed by Ger and Mags Kirwan of Goatsbridge Trout Farm in Thomastown, and will be available in Irish restaurants over the coming weeks

Caviar is processed, salted fish roe or eggs and is regarded as a luxury food delicacy and ancient gourmet treat. There are several types with the best-known form of caviar coming from sturgeon. But trout caviar has grown in global popularity in recent years.

“Trout caviar is good enough to eat off the spoon. It has large, golden-orange beads and a subtle flavour with a nice ‘pop’ when you bite into it. We are thrilled to be the first making it in Ireland and believe it represents the sort of innovation required in the food industry here. We have been very heartened by the response from the restaurant and food sector here so far,” says Mags Kirwan of Goatsbridge.

The caviar received the thumbs up from Russian buyers at the recent Bord Bia food showcase buyers event in Dublin. “That is the ultimate accolade for us. We weren’t sure how the Russian visitors would respond to the Irish-made caviar but the samples went down a treat with them and this has given us confidence that we can achieve strong export sales as well,” she said.

Mags and Ger Kirwan who have been running Goatsbridge Trout farm for 20 years first got the idea to develop Irelands first Trout Caviar on a visit to Sunburst Trout farm in North Carolina in the USA in 2010. Goatsbridge was started 50 years ago by Ger Kirwan’s parents, Rita and Padraig Kirwan, and is today one of the few commercial, independent trout farms in Ireland.

“We had been planning to launch a range of trout products on the Irish market and were very taken with the story of Sunburst which was making its name in the United States using their delicious trout caviar to highlight the fantastic high quality products they were producing” said Mags Kirwan. “We had a lot of similarities with Sunburst in terms of our business structure and the fact that the water flow through our farm was just like their farm in North Carolina.”

Ten months later the Sunburst Trout Farm development chef came to Ireland to help Goatsbridge harvest their trout roe, and a sample of caviar was produced in the laboratories of Teagasc in Ashtown with the help of John Fagan, a food technologist with BIM adopting the French method of taking eggs from maturing hens. “

While Irish people do not have a tradition of eating caviar, the Kirwans are hoping to change this with their new product. Many foreign nationals living here realise its nutritional value and it is very much part of their cuisine.

The Kirwans are at the very early stage of production and the Caviar will not be available in shops until the end of the year. Meanwhile this week it is being distributed to Irish restaurants across the country for tastings and feedback.

Goatsbridge is also developing smoked trout products which will be coming on stream nationally in the coming weeks. Currently Goatsbridge fresh trout is available across the country including completely boneless trout fillet which is proving very popular with young mothers for their kids as a way of introducing them to fish without the fear of fish bones putting them off for life.

To keep up to date with all our Goatsbridge Irish trout products, by sure to sign up for the newsletter.

12 thoughts on “Announcing the arrival of Irish Trout Caviar”