The most important thing is to live an interesting life. Keep your eyes, ears and heart open. Talk to people and visit interesting places, and don’t forget to ask questions. I think Aquaculture has afforded me that much more than any other job I could have considered doing in my life.

Last week I visited a new fish farm in Poland not far from Gdansk. Lots to see and plenty of questions. No matter what people think about these new recirculation fish farms the reality is they will be the future if we are to feed the ever growing population. However, we will resist this for as long as possible and hopefully find a way to continue using a flow through system and adhere to the new EU regulations coming down the line. Below is a picture of Ger contemplating life as a fish farmer in Poland. 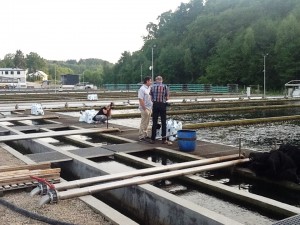 Fish Farming in the Sea

Although I have read extensively about Sea Farming I never managed to go out to see one first hand. I have to say I wonder to myself what all the fuss is about as I drive through Bantry Town to be met with signs objecting to the sea cages in the bay.

I was greeted by my good friend John Murphy who took me on a tour of his amazing Research Centre. As a former Scientist I was in my element but what impressed me most was the commerciality of the work they are carrying out. If just one of these projects proves commercial they will have achieved their goal. They are extracting oil form Seaweeds, growing Sea Urchins which command a very good price in Japan; they are testing Wrasse Fish on Sea Lice which could prove to be a very natural way to rid the salmon of these awful creatures. I could not believe my eyes when they produced some Sea Cucumbers which are most definitely a delicacy somewhere other than Ireland!

That evening we were treated to a fantastic meal in John’s restaurant of Crocodile, Camel and so much amazing delicacies. I have to pinch myself to remind me I was still in Bantry . 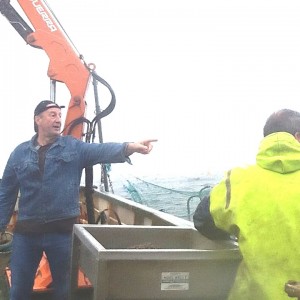 The following day we headed out with my nine year old son Pauric to see the lads feed the remaining fish that did not manage to escape along with the other 200 tons or so in February. What a disaster for this business. No matter what people think about fish farming I think nobody could possible wish this to happen. This man along with his very clever business partner Dave O Neil employ almost 60 people.

Heading back to Kilkenny my son informed me he might after all become a fish farmer.

Unfortunately John Murphy will not be encouraging any of his family to get involved in Aquaculture after the horrendous time he has experienced over the past few months. They are broken men! As I said to John, life is indeed interesting… In the end, some of your greatest pains, become your greatest strengths.

So hang in there John.