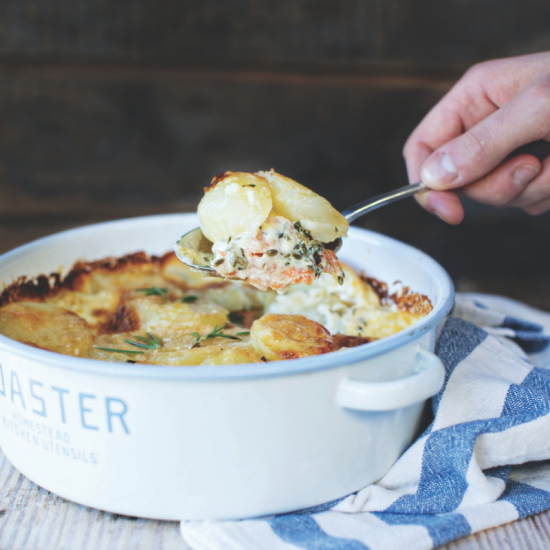 Preheat the oven to 180°C/350°F/Gas Mark 4. Bring a pot of water to the boil then add the sliced potatoes. Simmer for approximately seven minutes until parboiled. Strain, then spread half the potatoes in a layer, slightly over-lapping, at the bottom of a greased ovenproof dish (standard lasagne dish will do).

Layer the slices of cold smoked trout over the potatoes. Season with pepper (no salt as the smoked trout is salty enough). Sprinkle fennel seeds and tarragon on top. Layer the second half of the sliced potatoes over the fish.

Pour the cream over the whole dish. Sprinkle a generous amount of cheddar cheese on top and freshly grate over the Parmesan cheese. Cover the dish with tinfoil and bake in the oven for approximately 45 minutes. Take the tinfoil off after 20 minutes to let the cheese brown. Allow to cool slightly before serving.