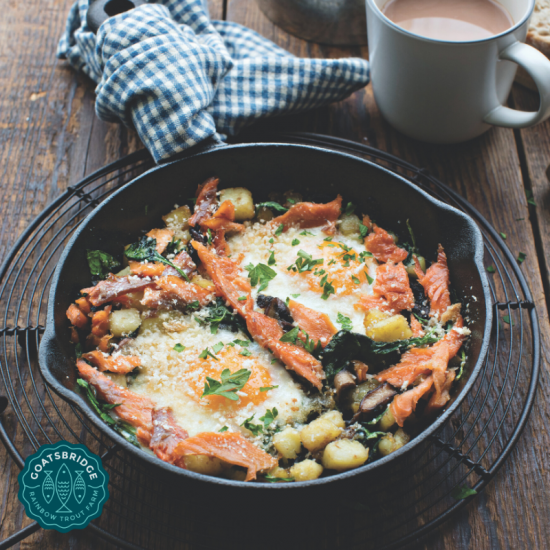 Fishwife number 5 is Sarah Bohan who founded Engage Ireland in 2003, a Dublin based communications company. It manages and eclectic mix of projects including Bord Bia’s ‘Potato: More Than A Bit On The Side’ campaign, Ireland’s Best Young Entrepreneur, Bray Air Display and the Student Enterprise Awards. Before setting up Engage, Sarah worked on the 2003 Special Olympics World Games and was a former Brand Manager with Centra. A sports fanatic originally from Cork, Sarah met her wife , Joanne, playing football ten years ago and they’ve been cooking together ever since.

Preheat the oven to 180°C/350°F/Gas Mark 4. Peel and dice the potatoes. Cook in salted boiling water for approximately seven minutes, or until tender. Drain in a colander.

In an ovenproof pan, heat two tablespoons of olive oil. Add the sliced onion and sauté until browned and softened, six to eight minutes. Next, add the mushrooms and cook until softened. To the pan, add one tablespoon of olive oil along with the potatoes and continue cooking, stirring occasionally, until the potatoes are lightly browned, three to four minutes; then add the spinach and toll until wilted. Season lightly with salt and pepper. Finally, sprinkle the smoked trout evenly on the top.

Remove the pan from the heat and, using the back of a spoon, make six divots in the top of the hash. Crack an egg into each divot. Combine the breadcrumbs and the Parmesan and sprinkle on top of the eggs. Transfer the pan to the oven. Bake until the egg whites are set but the yolks ate still runny, about 12 minutes. Garnish with the herbs and serve immediately with crusty bread. Yum!