I had a visit from a friend last week asking if she could write a guest blog for my website. I agreed immediately, with a promise that I wouldn’t edit it and would trust her to do a good job.

I presumed it would be around our business but to my surprise she wrote about yours truly.

Tara is a quietly spoken lady and one would never think Fifty Shades of Grey in her writing, until I read her first novel!!! Unbeknownst, before I read it, I gave Tara’s novel to my mother, who is an avid reader and boy did I have a laugh when I asked her how she enjoyed the book.

You would think butter wouldn’t melt in Tara’s mouth; I cannot look at her in the same light ever since.  Check out Tara’s books for yourself.

The first time I met Mag Kirwan, she was part of the snot-wiping, nappy-changing brigade.  Not her own, I hasten to add.  She was in the throes of early motherhood.  A role to which she brought her customary joie de vivre.  Paraic was the baby at the time, a curly headed cherub, now a curly haired pre-teen Adonis.  And his mother has undergone a similar transformation in the time since I have known her.

Because who could have predicted the business woman hidden within?  Like a big cat poised to leap.  Possibly those that know her well.  Her close friends, many of whom she has retained since their school days.  Her enormous, closely knit family.  Her formidable mother, in whose indomitable footsteps she follows.  It makes me wonder about their female ancestry, those warrior women going back generations.  And who and what her daughters will become.  The gazelle-like Aine.  The impish Orlaith – my own daughter’s oldest friend.

I suspect Mag herself knew all along.  Because I’ve rarely met a woman with such unshakeable confidence in herself.  Such boundless positivity.  It’s almost – and I hate to say it – un-Irish.  Even though she loves her country and is every inch the Kilkenny woman.  But it’s a lesson to all of us.  Not to play it small or play ourselves down.  Not to hide our own lights, in the mistaken belief that it will make others feel better about themselves, or perhaps make them like us more.  But instead to inspire and lead the way.  Spur on others to reach their own goals.  It’s what makes her proudly admit that she finds her own children gorgeous.  That causes her to say ‘thank you’ when someone admires her dress, instead of lowering her eyes and saying ‘this old thing’.  Like I said.  Gloriously un-Irish.  And it’s that same confidence transferred, that caused her eldest, Ned, to declare to a visitor to their fish farm, at the time of the economic crash, that Goatsbridge Trout Farm was going to make it through the recession.  Make it they did.  With bells on.  Isn’t that the kind of self belief we all want to instill into our children?

It was this self-belief that launched Goatsbridge Trout caviar.  Everyone thought she was nuts.  But did she listen?  Did she hell.  Proving once again that she was one of the sanest people around.  Because in a world gone mad, it often pays to go against the grain.  And leave the naysayers gawping open mouthed in your wake.

But it’s not all business and plain sailing for Margaret.  She’s gone through her dark times and more than her fair share of losses, notably the deaths of her father and brother at a tragically young age.  She is startlingly and refreshingly open when she speaks about the difficulties that this caused her and her struggles to overcome the pain of this loss.  My own opinion is that is taught her at a gut level that life is short and that each opportunity should be grabbed by its you-know-whats.  And it also taught her empathy for other people’s pain.  It was this empathy which accompanied her and a good friend into a chemotherapy session.  So the friend would not be alone.  So she wouldn’t be afraid.  And it was with her as she minded that friend’s children, as she made her recovery.  It is also present when she is there for her siblings. as they navigate life’s inevitable rocky patches.

Am I making her sound like a saint?  Because she isn’t.  Neither am I.  And neither are you.

You could be forgiven for thinking that every time you open a business page these days, an image of Margaret Kirwan is smiling back at you, together with her husband Ger, he of the movie star looks.  Standing like a rock beside her.  As if they were carved out for one other.

They head a household in which family and business are almost indistinguishable, each blending seamlessly and wrapping around the other.  And at the heart of this home, a woman of incredible drive and entrepreneurial spirit.  A force of nature if ever I saw one. 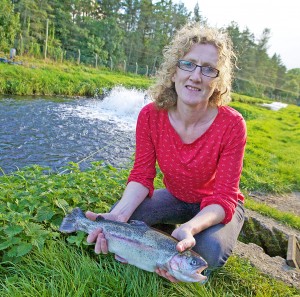 On this blog I’m going to share all the news we have as we develop our fantastic Irish trout products. It’s also a place for you to catch up on food related events that we are taking part in, hear about other artisan food producers and join us on the journey as we strive to make the world more aware of our heavenly tasting Irish trout products!

We are also going to share lots of trout related recipes so no excuses for not cooking!

Just thought the other day as I sat in a meeting with a number of kilkenny food producers and my ‘big sister ‘ how things never really change. I grew up in a large family and have an older brother who was 2 years older and a sister who was 1 year older. My mother had 7 more kids after me.

Miriam was always the big sister. I remember clearly having to give Miriam a lift down the first flight of stairs to the toilet each night. Louise and I would cross our hands to make a seat and Queen Miriam would climb aboard. She always promised a return trip back but needless to say that never happened.

Miriam is still the big sister as she puts me in my place when I make a ridiculous suggestion during one of our many meetings planning the Kilkenny Food Trail. She had just left her very successful career in journalism to pursue a career as a pr consultant. You may be wondering how on earth we got so much media presence in the last few months and continue to do so. It all boils down to the genius that is Miriam Donohoe, my big sister.

So when you read our spread in the Food and Wine magazine or hear Damien O Riley talking about Goatsbridge on his Saturday morning show think of Miriam Donohoe. She can do it for you too. 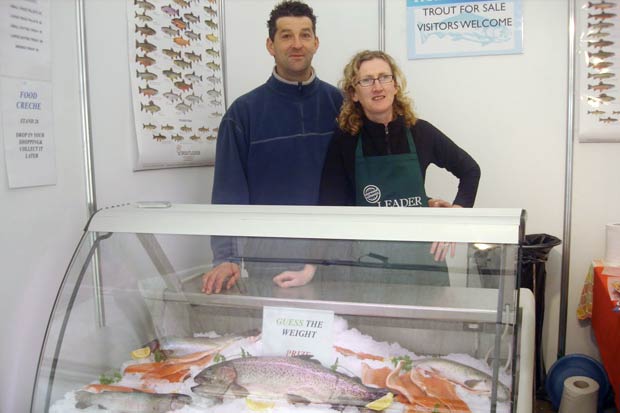 I love my husband dearly but boy are we different.!!People often ask what is it like to work with your spouse.Fantastic is the usual answer but I always have to clarify that statement.We are very different but this business need both parties on board. Time has thought us to clearly define our roles . Ger looks after operations and I look after everything else.

END_OF_DOCUMENT_TOKEN_TO_BE_REPLACED 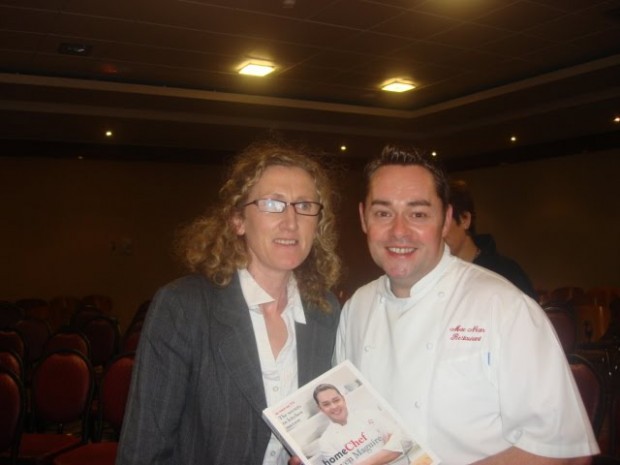 Neven Maguire participated in a cookery demonstration in aid of some worthy Kilkenny charities a few weeks ago . He kindly decided to showcase our new hot smoked completely boneless rainbow trout . He made a buttery smoked trout sauce to accompany roasted haddock. it tasted delicious . We swapped some trout for his latest cookery book at the end of the night. I think he is the food version of Daniel O Donnell.!! Really lovely guy.